For practitioners of German longsword it is fairly commonly known that with some stances and cuts we should put our thumb against the flat of the blade. For example Meyer tells us “From there deliver a Thwart … so that your thumb always remains below on your shield…“(1). However, looking to the sources, several of them show a lot more complex variation in their gripping of the sword. This we shall now examine a bit closer.

While some masters seemingly do not show any variation in gripping at all, we see more complex gripping starting in the middle of the 1400s, with Talhofer and Leküchner respectively showing holding on to the grip in quite obviously very intentional manners, gripping from above or the side. Different masters seemingly had somewhat different preferences but several of the masters of Meyer’s lineage tend to grip their swords in similar and quite complex ways, and this we shall return to later.

As to why some do not appear to change grips while others frequently do, I suspect it is part of a larger picture involving individual preferences for distance management, binding etc, all of which is of importance to hand safety.  To some degree it is also likely due to a lack of attention and skill on behalf of the artist creating the illustrations and perhaps even a wish of the author to keep some finer nuances secret, only to be taught in person and with financial compensation. Still, some of the very best illustrated resources, like Talhofer, Medel and Meyer, show some very interesting details.

Although few Germanic masters speak about grips in any detail, as far as I know, famous Japanese swordsman Myamoto Musashi speaks of grips in some detail:

A sword is to be held in the following manner: the middle, fourth and little fingers should grip the hilt vigorously while the thumb and index finger should be lightly placed on the hilt.

There are two types of swords and hands – live ones and dead ones. If the hands grips the sword too firmly when taking the stance or parrying, then it is too difficult to take the offensive. These are what I call “dead” hands.

On the other hand, if one grips the sword in a relaxed manner, he can continually take the offensive. These are “live” hands. One must not cross one’s wrists nor bend one’s elbows too much or too little. Muscles on the upper side of the arm should be relaxed, those on the lower taut.” (2)

Although Musashi speaks of single hand grips for use with two swords, Meyer too certainly appears to teach this type of gripping with a longsword, as seen in the image above, taken from his von Solms treatise of 1560/68.

Comparing the sources treated here there are basically three distinct ways of gripping; one with the fingers wrapping the whole grip in a hammer grip and the second gripping only partially with an “open”, angled grip and the thumb extending forwards against or somewhat beside the cross, and with the grip clearly visible between the finger tips and the fleshy bits of the thumb. The third is simply with the thumb pressing against the flat of the blade or the side of the grip. The latter two allow for more variation in handling of the sword and can also provide more safety for the hands in binds close to the cross, while giving better reach with crossed arms, more strength in the bind and also easier control of edge alignment.
Finally there is also a semi-halfswording grip, Übergreiffen, where you grip the strong of your blade with reversed hand, for increased strength in the bind. Shortly put, dynamic grips is the key to unlocking freedom in striking and control in the bind.

Here is a brief video showing the three main grips and some of the transitions. It also shows the Übergreiffen with associated transition. It doesn’t focus on variations of hand placement or cutting types. Furthermore it doesn’t show extending the thumb by the side of the cross which also is a perfectly viable option and in many sources and counting the sources the more common variant, while Wilhalm, Paurñfeyndt and Meyer seem to centre their thumb more.

In the last section of this video, and as previously mentioned, we see an example of transitioning to the Übergreiffen (Gripping over) which Meyer gives three or possibly four examples of:

Gripping over is this: cut from your right to his upper left opening; and in the cut, grip with your fingers out over the quillons or shield, while keeping your thumb on the haft; and raise the pommel with your left hand and strike him on the head with hanging blade over or behind his parry. (3)

Now if he delivers a Thwart or cuts from below, then cut on top of his blade, or see that you come first with a Thwart under his blade. But if he should come with his Thwart under yours, then let your blade hang down well over his, and press it down from you with your shield; you may thus reach his head behind his blade with the short edge, or strike around after you have pushed his blade downward from you, etc.

If an opponent cuts from above, then cut against him from your left from below with the long edge, and when he pulls his sword back away from yours, and is going up with his arms, then grip over your quillons onto the blade with your fingers, and send your blade over both his arms, as shown by the two lower figures in the following image [M, leftmost scene]; wrench thus to your right side. If you wish, you may then cast him thus: step with your right foot behind his right, and catch him by his neck with your short edge, and at the same time shove your pommel away from you over your right arm toward your right; cast him thus on his back toward your left over your right leg.

Item, if an opponent delivers a Thwart at your left ear, then fall down with the long edge onto the middle of his blade; and when you fall on it, again grip over your quillons onto the blade with your fingers, and lay the short edge behind his blade on his head; concerning this see the large figures in the same image [M]. Shove your pommel away from you, holding him such that he cannot get free until you have hit him. However, if he forces out from under your blade, then quickly pursue him, and again catch over both his arms as before. (4)

Below is a gallery of illustrations showing the variety of grips. Some masters appear to prefer certain cuts and therefore we also see a preference weighing towards the associated grips. Mair prefers to always have his thumb extending forwards onto the blade, while Wilhalm seems to stick to using a similar grip, but with no illustrations of thumbing the blade with a Zwerch. Talhofer, Paurñfeyndt, Joachim Meyer and the Hans Medel fechtbuch are the clearest sources depicting a complex variety in gripping of the sword. Meyer may well have been trained as a freyfechter of the Marxbruder fencing guild originally (5). We know for certain that Hans Talhoffer and Peter Falkner were Marxbruder, with the former being one of the founding fathers and the latter a three time Hauptmann (captain) of the guild. Paurñfeyndt calls himself a “freifechter” which at the time was used as a rank within the Marxbruder guild (6). Interestingly the Medel Fechtbuch, while written by a student of Hans Medel, was collated by well-known fechtbuch collector Paul Hektor Mair and contains records of the Marxbruder. If all this points to a development of gripping style within the Marxbrüder still remains to be seen.

Next time we will turn to the topic of cutting.

If you haven’t already, then I strongly encourage you to read the earlier articles in this series as they are all dependant on each other.

Until next time, thank you for taking the time to read this and feel free to comment and share your ideas!

5. There are several indications that may point to this, with the primary ones being:

Meyer is called a “freifechter” at a time when it was most commonly used as a rank within the Marxbrüder.

We also find similarities to the Kölner fechtbuch which also bears resemblance to the Marxbruder teachings described by Hans Sachs and in the Medel Fechtbuch.

We also find a dussack poem from Meyer in Cristoph Rösener’s book of 1579: This poem sticks out from Meyer’s other ways of teaching. Teaching in verse is an older way of teaching and something which is disappearing by his time. Possibly, these verses are not his own Zettel, but some Marxbruder Zettel, or even older than that, perhaps slightly rewritten by Meyer.

Meyer’s “moral” reasoning on gambling, prostitutes etc also seem to fit more with the traditions of a guild, as seen in both the Marxbruder or the English Company of Maisters of the Noble Science of Defense regulations about “easy women” etc than Meyer attempting to bring more moral into society. These bits are VERY similar to the oaths of the guilds.

Finally, it is also interesting to note that Meyer doesn’t use rhyming for anything but the longsword and the dussack (messer), and the longsword bits are more archaic than the rest of his teachings.

6. The term freifechter was used by the Marxbruder guild, a fencing guild formally chartered in 1487, refering to the next to highest rank and giving the fencer right to travel and teach and arrange fechtschuler. The term may however have had an older and wider meaning, that still remains a bit unclear. The first known reference to freyfechter comes from Hans Leküchner’s Kunst des Messerfechtens of 1478 (Cod.Pal.Germ.430) and describes techniques that are good to use against them:

(Translation by Grzegorz Żabiński, Russell A. Mitchell and Falko Fritz) 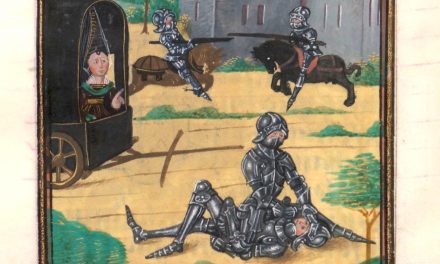