Little is known of any indigenous martial arts traditions of Scandinavia, and while the Icelandic tales, Konungs Skuggsjá and Olaus Magnus give us some clues and Glima still remains both in its modern sport form and, to a lesser degree, in its older combat form, very little else can be found that doesn’t find its roots in Germanic, Italian, French or Asian traditions. 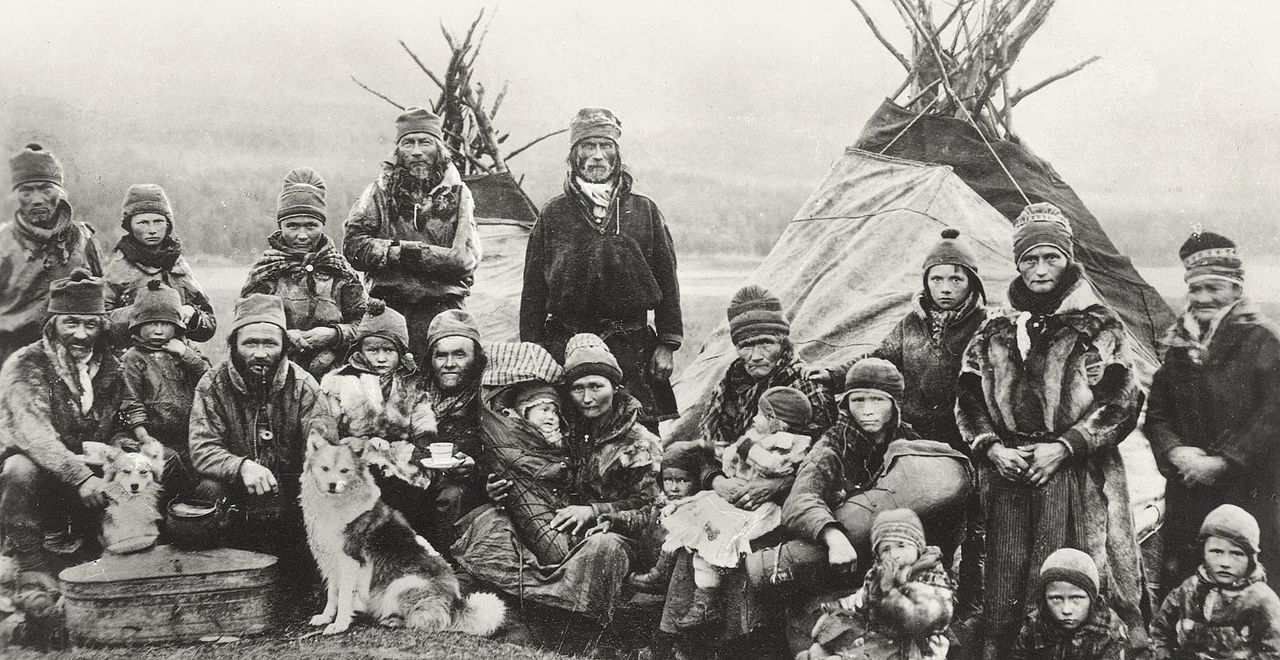 However, just going back about 180 years we find a still living staff fighting tradition in the North of Sweden, among the Sami, called “Skalastet“. Below are two stories told by the priest Petrus Laestadius who served as a missionary  in the north of Sweden between 1827 and 1832. The chaped staves are  similar to those carried all over Europe, not least in the still living Portuguese staff fighting tradition Jogo do Pau, if a fair bit longer.

These anecdotes should of course be read with the fact in mind that they are written by an outsider, a missionary Christian priest among what he regards as uncultivated, uneducated heathens, but they provide at least anecdotal evidence of a Sami tradition of practicing staff fencing in gatherings.

The “Skalok” Anders Enarsson was born in 1779 in Låkteo Raappen, Arjeplog, Sweden. He married the widow Kerstin Larsdotter in 1809 and they had two children; Nils who was born and died in 1810 and Kerstin Andersdotter, born in 1811. The first story is about him.

“On the Thursday, September 13, I headed for a Goahti (“tipi”) camp on the southern side of Barturte [A mountain in Norrbotten, in the North of Sweden]. Here too were three goahti. These Sami still held their reindeer somewhat together and I first met the reindeer herd which two persons followed. These two were middle-aged men, but of a harsh appearance. The one was a fairly tall man, with yellowish hair and an unusually large nose, and was son of the previously mentioned “Bear-nose” and as his father notoriously known for thieving. His name was Anders Thoresson. The other was called Anders Enarsson and was called Skalok, which one can translate to “Fencing Master” or “Fighter“.

The Sami used to carry long wandering staves out of birch and in some places practice fighting with these, which through a kind of harmonia imitativa was called skalastet. But occassionally one skalastet in earnest, and this the fencing master once had done with such fierceness that he had killed a man. For this accomplishment he had been sentenced to 40 whippings with a cane and life time imprisonment.

A “sjösame” (lake/sea sami). Photo from 1884, by Prince Roland Bonaparte

The first punishment he had endured, but after spending 10 years at the fortress, he had been pardoned and came home a couple of years ago. He had then come to Arjeplog, just at prayer day and had at once gone to the priest house. Plenty of Sami were there who at the sight of Skaloken stood as frozen and hardly knew if they saw a real man or a ghost, but Fjellström, who didn’t know the man, for it was under Sundelin’s time he had been taken away, asked: Wherefrom do you come? “From the Southern Lands” was the answer. He was dressed in Swedish clothes; but the face revealed nevertheless that he was Sami, wherefore Fjellström so much more wondered about the wandering man and asked: Have you been at sea? Onto this he replied: No, I come from Carlsten’s Fortress, and showed his passports.

Nothing is however more inappropriate, at least here, than such kind of punishments that involve a kind of deportation for a certain time. For, not only do such arrestants, or if one pleases, correction servants, commonly return more corrupted and hardened than before, and make an honour out of having traveled the world thus gaining respect, as they have been far in foreign land, which among ignorant people always mean a lot, fooling their remaining countrymen all kinds of foolishness or guide into misdeeds and show, at least with own example, that one by such do not suffer any, as what should be a punishment for them is a reward. Thus was also this Skalok said to have described “how it was nothing bad being at fortress labour, it was only ‘as being in service of a somewhat stricter master’. He had done a foolish thing when he had slayed the previously mentioned man, when he had with his staff struck him dead. He should have stomped him in the chest, as then he would have walked free as no one could have proven against him about the slaying.”

– From the journal of Petrus Laestadius for his first year of serving as Missionary in Samiland, 1831, retelling his experiences among the Sami of northern Sweden in 1827-1832.

The second story speaks more of the construction of the spear-staff, but also briefly recounts a serious accident that happened in a fight using it.

“One waited daily for the provincial doctor, not just for this patient, but also for another, of whose hope there was little. This was a Swedish man, who had gotten into some form of trouble with a Sami, and therewith had been struck by the latter with the spear-staff. The Sami use in wintertime, to assist them when ski walking, a thick birch staff, 4-5 ells [2.4-2.97m] long or more. This has in the end a chaped end with a spear, partially as a weapon when fighting wild beasts such as wolves and bears, but also as a means to punch through the ice to get water. For when the ice is thick, sometimes as much as 2-3 ells, it is impossible to make a hole with the axe. 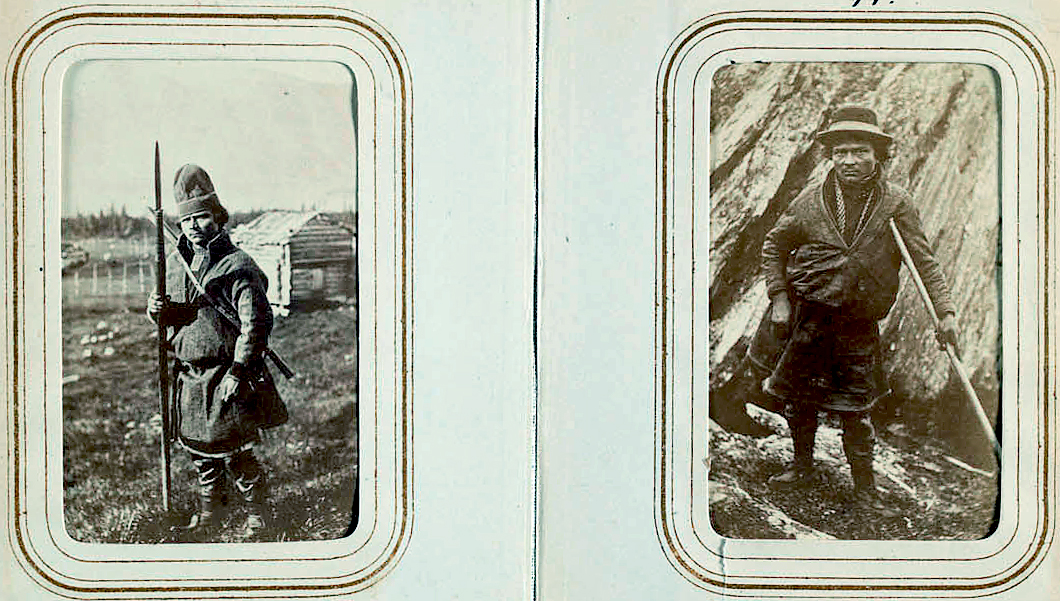 From Lotten von Düben’s photos from ethnological expedition to Samiland, 1868.

This weapon is still at times dangerous, as it happens in times of anger that one uses this even against one’s wrong-doers, to give a powerful strike. The spear itself is provided with a sort of chape or sheath out of reindeer horn, also used for the skaer-skis. Some reindeer have in their foreheads a horn that extends forwards and expands, becomes wide and flat almost  like a human hand. This is used as chape for the spear-staff, in the manner that the narrow  end which is the closest to the reindeer’s head is hollowed as a sheath for the spear, and the  flat part is cut square so that the chape becomes a small shovel which one uses to thrust loose snow that is gathered and packed under the foot as one skis and from which one has much trouble. This chape sits no tighter than that he flies loose with a strike to a tree or anything other that is hard. Then the spear comes bare. This can happen by accident, when one  fights in earnest (skalastet) with these skiing staves, whereupon the weapon becomes so much more dangerous. Such an accident had happened to the Sami which is spoken hereof. He had with the spear given his wrong-doer, which laid straight forwards on the ground, a hard strike in the back of the neck, but said he had not known that the spear was bare.

– From the Continuation of Journal over Missionary Travels in Samiland, including the years 1828-1832, 1833, by the missionary priest Petrus Laestadius, retelling his experiences among the Sami of northern Sweden.

Why Fight? The Objectives of Liechtenauer’s Fencing 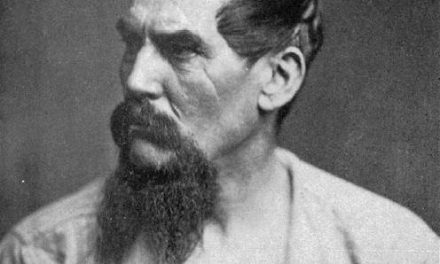 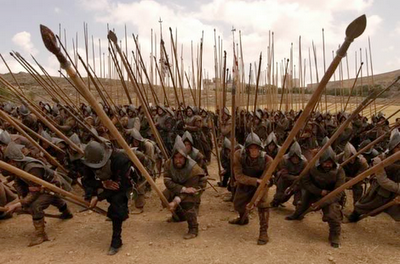 The use of sword behind the shield wall and phalanx 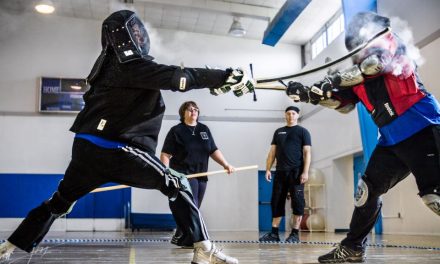