Longswords and their data

For the past year or so, I have been gathering data on longswords. These come from a wide range of different source, from the dark nooks of the foreboding internet to dusty tomes found in libraries. The quest has yielded around 60 longswords dated from the 13th to the 16th century.

Of course, these swords were chosen according to certain criteria. These criteria are as follows:

a)    they have at least the weight, length and total length listed

f)     they are not federschwerter

Some may find these criteria artificial. And they would be correct. However, they allow me to encompas a decent number of swords, which can be then further picked by anyone who does not agree with my own criteria.

The purpose of this research is two-fold: first, to present a database (albeit a small one) of swords with at least the most basic data. Yes, there is data missing, data that I believe is highly valuable, such as the point of balance. However, if I included the point of balanc as a criterion, I would sadly be left with about 10 swords.

Since I believed it is rather unwise to put the swords all in one basket, I have decided to analyze them according to their century. Because of the very small number of 13th century longswords in the database, I have put those together with the 14th century longswords. Then I proceeded to calculate the various ratios until I realized I am an idiot for not letting Excel do that for me. Below are the results:

The sample size here is rather small, only 12 swords. The scatter pattern they present in the blade length/total length is pretty homogenous, with the average ratio of 0,7908, meaning the blade takes up about 79% of the whole sword. If we remove the only true extreme with a ratio o 0,84, we receive an average ratio of 0,786 with a standard deviation of 0,0157.

To get a feeling of how the swords would look in terms of handle/blade length, please refer to the following graph:

The space below the blue line is the whole length of the sword, below the orange is the blade length, and between the two the length of the handle. It is interesting to note that the shortest sword, sword no.10, has a ratio of 0,77, meaning it has a handle that is percentually longer than the average. On the other hand, sword no 7., which has a total length of 1158mm has the shortest handle percentage-wise, which is 161mm long (including the crossguard) – the shortest overall sword, by comparison, has a handle that is 191mm long including the crossguard. Of course, no conclusions can be made from such a small sample, and it is quite susceptible to artifacts and misinterpretations.

As far as the weight is concerned, I can make out no discernible trend. The ratio of grams per milimiter of sword vary from 0,94gr/mm to 1,75gr/mm and length does not necesarily influence the weight per milimiter of blade. The average comes in at 1,32 gr/mm Below is the graph:

The sample size for the 15th century is slightly bigger, with a total of 18 swords in the sample. This is still a relatively small pool, however, so I will be careful in drawing any definitive conclusions.

The 15th century holds a bit more variance in the BL/TL ratio, ranging from 0,66 to 0,85. The mean comes down to 0,774, meaning slightly longer handles compared to the 14th century. Again, due to the small samples, this is quite likely an artifact so it should not be taken too seriously. Both average ratios are close enough to make this distinction unimportant. However, there is a lot more variance, with the standard deviation being 0,04488.

Below is the graph for easier visualization of BL/TL ratio.

As you can see, the large deviations from the mean are more often in the term of the handle getting longer.

The most that we can say is that larger swords are generally heavier. Except when they’re not. Which isn’t that rare.

Now for this one, I expected things to be quite different. And in a way they are, but in another, they really are not. It is the biggest sample with 31 swords. This is still a pretty small sample, though.

16th century has most of the extremes. And this doesn’t just go for a sword or two, the whole sample is much more elongated. So we have a lot of swords around 1000mm as well as a lot of swords that are around 1400mm. The BL/TL ratio ranges from 0,73 to 0,83 with the mean of 0,78. While there are no great big extremes like the 0,66 from the 15th century, there is more of each side of the extreme, possibly due to a larger sample, as the standard deviation of 0,031 suggests.

Again, below is the graph for visualization:

And once again, not much can be said about the weight:

The average W/TL ratio varies the most here, from 1,05 to 2,17. The average is 1,43, noticably heavier than the previous centuries, though not so much as to be incompatible. Now, let’s see what an average 16th century sword is like.

The average length is 1169mm, with the blade length of 912mm and the average weight of 1,671. What do you know, it’s pretty similar to the previous centuries. A bit heavier and a bit longer, but not by much. The thing that changes the most is the appearance of the sword.

So what purpose exactly do these pretty graphs serve? Well, for one, they make me feel scientificy. Secondly, there is not that much difference between the swords from different centuries. I wish I had the PoB data as well to confirm this. But, whatever sword you prefer – a heavy long longsword, or a light and long one, or a heavy and short one – you’re absolutely right in saying it is historically correct. But it’s not the only one that is.

Also, simply because the average longsword length is around 115cm with a handle around 24cm, it does not mean federschwerter are wrong, as they follow the advice given in fechtbuch illustrations more closely (see https://hroarr.com/how-long-should-a-longsword-be/).

Keep in mind that these swords might have been used for different purposes. Perhaps the longer swords were meant for judicial combat, while the shorter ones were for civilans and civilian defense, since you had to keep it on your belt. In the same fashion, the shorter blades with a higher BL/TL ratio might have mostly served a role of their own.

If nothing else, I hope at least the database will serve some purpose. I promise, I will move it to a more respectable domain as soon as I can, since the current site has some serious issues with formatting. Now I’m off to be sciency! 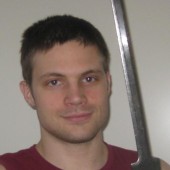 Alen Lovrič started his HEMA path in late 2007, with his love of the longsword lasting to the present day. Consequently, the longsword of the Lichtenauer tradition is his weapon of choice, with Ringen and the dagger being secondary interests. As of 2011, he is one of the instructors at Academia Artis Dimicatoriae. In terms of scholarship and research, his personal interest lies in applying modern sport sciences to HEMA, as far as applicable.

Chivalry East of the Elbe, Part I