Fighting as a communicative skill

Since the elements described and explained up to now are properly just a beginning and primer from which all combat devices with the sword can be learned, it is necessary that before I derive some devices from them, first I should show in what way this shall take place.

For if you wish to write a full proper word, you must hold in your mind and memory all the letters, and also know thoroughly what the nature and property of each one is, so that the useful and appropriate letters will fly into the pen one after another in order; so likewise in combat you shall hold and conceive the previously explained elements in your mind, so that whenever you come to fight with an opponent, the ones you need at that moment will come to you at once. But as not all letters can be used for every word, so it is also impossible to undertake all the elements that I have described here all at once in every device.

Therefore you shall take heed what the situation requires; how your opponent conducts himself against you; also what kind of person he is, whether he is swift or slow, big or little; and you need to know how to use your work and confront him accordingly. 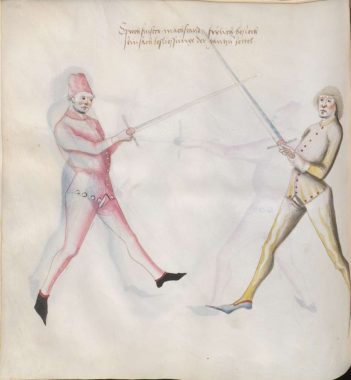 So, taking a bit of inspiration from Meyer’s simile above and coming from a background of extensive language studies, I decided to make some comparisons between fencing and talking since at its core, fencing is really all about quick and spontaneous communication, about two people sending messages back and forth, much like a rap battle or the old Norse flyting. And not just talking but also listening, using attacks and defences to cause an effect or reaction.

However, this is also how an inexperienced fencer can sometimes defeat an experienced one, simply by drowning the message of the opponent with a louder one, just refusing to acknowledge that the other is speaking. And a similar tactic can be used even by experienced fencers, not allowing the other to come to words at all, just hogging the narrative and controlling it supremely.
On the other hand, just being passive and only listening is even more dangerous than not listening at all as complete one-way communication in this context is a great danger to the listener. It can only be done if you are still in sufficient control of the conversation, which is nigh impossible to be certain of.

Old door with “sprechfenster” (speaking window), from which the longsword stance takes its name.
Photo by Pablo Andres

You can also tell a lie to trigger a response in your opponent, but for it to work, it absolutely has to have the appearance of a potential truth, and the more experienced your opponent is the harder it will be to give your lie that appearance. Furthermore, the best lies are the ones you can trigger your opponent to tell himself. This is also true for any provocation. The best way of knowing what your opponent will say and do is by giving him the idea in the first place. And of course, if the lie has the potential of actually becoming true, then by all means, let it be so.

One of the greatest moments one can have in fencing is when the communication works perfectly and beautifully, when the words flow easily and string together with those of your opponent, leading to a wonderful conversation full of wit, jesting and cleverness. This is also where fencing connects to partner dancing and horse riding, and it is the reason why these three were even connected in history, especially when fencing becomes more about duelling than war. Like with dancing and riding, fencing only works well if communication works well and/or when someone is leading, with both parties being aware of who is actually leading, and at its highest levels of refinement it all happens more or less without conscious thought.

Worth noting in particular though, is that we communicate with three things; our faces, our bodies and our weapons. However, one of these three, our faces, are for us commonly completely obscured by our fencing masks, and thus rendered useless for communication and trickery, quite unlike for actual fencers from history who fought unprotected. Our masks also numb our senses making it somewhat more difficult to read our opponents properly, especially his spirit and attitude.

Finally, we also need to recognize the attitude, the level and the quality of communicative skills that our opponent possesses, and act accordingly, just like Meyer tells us in the quote in the beginning of this article.

To get there though, we need to build a vocabulary (concepts of techniques & principles) and learn pronounciation (execution of techniques), grammar (context required for application) and prosody & intonation (fine practical variation to adapt to context and achieve result), so we can both speak and listen, and through this establish either good communication where we can outwit our opponent, or compose such a strong message that the other never even gets a chance to speak.

Now, the simile between the components of fencing and vocabulary, pronounciation and prosody & intonation, and how it relates to both flyting and internalization & appropriation is something I could expand on quite a bit and may well do at a later time, but  for now I think this will have to suffice as I fear this little article will get bloated, lose focus and become confusing otherwise. I will instead leave it up to you to consider and play with.

Thank you for reading!
Roger Norling
Instructor with the Gothenburg Free Fencers Guild

The Dutch Experiment – De Hollandsche Methode, Christiaan Siebenhaar, and fencing in the Netherlands in the 19th Century