Fechtschwert or a blunt longsword? 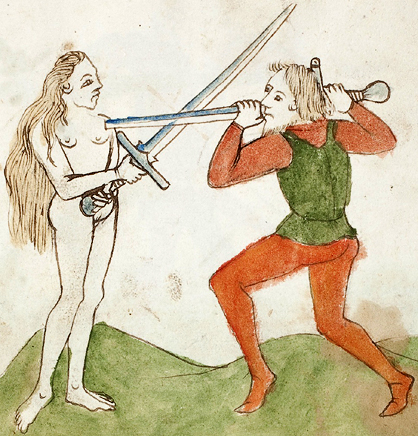 What kind of steel longsword should one choose for sparring? There are of course many aspects to consider. However, many instinctively discount the so called fechtschwert, since they look too weak and commonly are associated with sports fencing in late 16th century fechtschulen, rather than proper training for combat and duelling. They are simply not seen as “real” swords. Is this really a fair assumption?

With this in mind, we can look to the fencing manuals and see what was used by our predecessors. After all, they ought to have had a good grasp on what tools one should use for good and solid, traditional training that leaves you well-equipped for actual combat. As we shall see later, the fechtschwert have been commonly used for practice since the early 1400s, so there is clearly some merit in practicing with them. But there may be even more interesting aspects surrounding these mystical swords of which only a rare few have been preserved.

What’s with the odd-looking ricasso?

Well, the common explanation, and the one used on Wikipedia, is that the odd shape of the blade moves the mass closer to the hand, so that the control of the point is easier and so that less punch comes with the strikes. As a result you get a good weapon for sparring with little protection.

However, although I believe that this is partly true, at least with some fechtschwert, I have a nagging feeling that we do not yet fully appreciate what at least some of the fechtschwert actually are. At this point perhaps I, to avoid further confusion, should clarify that when I speak of “fechtschwert” I do not necessarily mean swords with flexible blades, but rather speak of the shape of the blade, with a broad ricasso and narrower blade.

So, what’s bothering me about the fechtschwert then?

The fechtschwert upon which Albion partly based their Meyer. As can be seen, it has a strongly flared ricasso. This sword currently resides in Askeri Müzesi in Istanbul.

After having studied all the illustrated manuals I have access to, which are quite a few, and after having compared the depictions and occurrences of different types of longswords to various types of preserved, sharp longswords, it is my belief that some fechtschwert, with widely flared ricassos/schilt, may actually be precursors and/or training versions of the complex-hilt longswords and the bidenhänders, since these three types of swords all offer similar protection for the fingers if you put them over the cross, or for the hands in a bind at the strong, by keeping the opponent’s blade a few inches from the cross.

As can be seen below, some fechtschwert are very close to the bidenhänder with their parierhaken and there may be more connections here than we have realized. Just take a look at the images of longswords in Lovino’s 1580 manual, where the parierhaken vary in placement from right in front of the cross, like the flared ricasso of the “fechtschwert” to about a foot from the cross like on regular zweihänder.

It is also very interesting to compare regular 14th century longswords with leather “rain guards”and early 15th century fechtschwert to 16th century bidenhänder with parierhaken and complex-hilt bastard swords from a functionality perspective. All four types offer similar applications of use and perhaps this is no coincidence?

With the above in mind, it is interesting to compare the following two images:

From the Swedish manuscript Magnus Erikssons Landslag (Country Law) of 1350

This image appears to show some form of flared leather coverings on both the arming and the longsword. The purpose is unknown, but it could possibly lend some more credibility to Roland Warzecha’s theory on rain guards being an early hand protection, as they appear to offer little protection against rain.

Italian spada da due mani, dated to the 15th-16th century. Kept at the New York Met.

The bars extruding between the cross and the parierhaken in the image shown above are also very interesting. These will turn the opponents blade away both from the hands and from the body. They also seem to make it hard to grip the ricasso behind the parierhaken.

How far back does the fechtschwert actually go?

Of course we have little idea of what was used before we see the first illustrated manuals, but the first “fechtschwert” can be found in the “Gladiatoria Fechtbuch” Ms.Germ.Quart.16, as seen below. Interestingly enough this manuscript shows the fechtschwert in the context of harnischfechten, in armoured combat. This is is just about 45 years after the important, but not illustrated manuscript Hs.3227a, which  currently is considered to be the earliest manuscript in the Liechtenauer tradition, dated to about 1390. Not without dispute, of course.

Image from the Gladiatoria manuscript of 1435, showing a “fechtschwert” and/or a panzerstecher used in armoured combat.

The second earliest manuscript showing a fechtschwert is the so-called “Von Danzig” manuscript of 1452. There are only two  images in this manuscript; one showing the four basic Liechtenauer longsword guards Ochs, Pflug, Alber and Vom Tag and the other image, on the left, portrays a fencing master, which has been suggested to be Johannes Liechtenauer. Both images clearly show fechtschwert.

The third manuscript is not in any way less interesting. It is taken from the Gladiatoria manuscript Cod.Guelf.78.2 Aug.2° which was written about 1465. Unfortunately, I do not have access to any more images of this manuscript.

The woman can, with a little good-will, be said to be standing in a version of the Eisenpfort (Iron gate) guard or Pflug, but her blade is displaced by the man who is using his sword with a half-sword grip, holding the blade, and is actually thrusting the point into the left shoulder of the woman.

There are other images of German judicial duelling between man and woman, but in those cases the man always stands in a hole to his waist, armed with a club, while the woman moves freely armed with linen cloth holding a large stone. Why this woman is armed with a sword and naked is a confusing issue.

It is hard to tell what kind of sword the man is using since the hilt is partly obscured behind the man’s head, but the woman clearly uses a sword with a flared ricasso/schilt. Oddly, the blade has a proper ridge, which no found example of training swords appears to have had, probably since the purpose of the ridge is to make the blade more rigid in the thrusts, thus making the sword more dangerous for training. This can also be seen in the first image of the 1435 Gladiatoria manuscript depicting armoured combat, but not in the second image showing a fencing master, from the “von Danzig Fechtbuch” of 1452. However, this may of course also be due to artistic license.

Furthermore, of those manuals that do not show fechtschwert used for practice, the absolute majority show swords with leather rain guards and/or armoured combat/judicial duelling, the latter of course showing sharp swords designed to maim and kill. The two notable exceptions in the list below are both Italian; Fiore Dei Liberi and Fillippo Vadi. Neither of them show rain guards or fechtschwert, even in unarmoured combat.

So, to conclude, we know that the fechtschwert were in use as early as the third decade of the 1400s and perhaps even earlier than that. Since the first proper longswords are found in the mid 1300s, which coincidentally is about the time that Johannes Liechtenauer is thought to have been born, it would seem as if the fechtschwert pretty much follows the development of the longsword practice in the Liechtenauer tradition, with possibly even Liechtenauer himself having seen or used fechtschwert. Later the use of fechtschwert flows over even into the Italian fencing traditions, with proper two-handed swords. As such, they may also be early forerunners of the later complex-hilt bastard swords.

A final few questions that I will leave hanging. Looking at the examples of Ms.Germ.Quart.16 and Cod.Guelf.78.2 Aug.2° where we see what appears to be fechtschwert used in armoured combat and judicial duelling, one can wonder if the swords portrayed were rebated or sharp? The context could indicate that they were indeed sharp. So perhaps the borders between the fechtschwert and regular longswords are not as clear cut? Maybe the assumed safety characteristics of the fechtschwert are only part of a much more complex picture?

Addendum: May 30 2011.
Today I was contacted by Shay Roberts of Academy of Arms. He had read this article earlier and when visiting Neue Burg in Vienna he noticed the sword below. It has the schilt of a fechtschwert, but a rigid, sharp blade and a blunted grip section in the middle of the blade for half-swording. Clearly, this is not a blunt training sword, but rather intended for armoured combat. In fact, it is highly similar to the sword seen in the Gladiatoria manuscript from 1435, as shown above. Interestingly enough, the sword also has a rain guard made out of leather just as in the Gladiatoria manuscript.

Here are a few more interesting images of fechtschwert. The first two show a an early complex-hilt sword and a regular fechtschwert similar to what we have seen before. The following two are even more interesting since. They are taken from the manuscripts of Jörg Wilhalm and show what looks like typical fechtschwert-shaped swords, but used in a clearly non-fencing school context and with one image clearly taking advantage of the flared schilt. However, these two images are a little odd, since they differ in artistic style from the images surrounding them in the manuscript, and they appear to have been added some time later.

Here follows an incomplete list of what types of longswords can be seen in the illustrated manuals.

How long should a longsword be?

Introduction to reviews of Sparring Swords.

The Origins of the Two-Handed Sword – by Neil H. T. Melville

How computer based systems can help improve our fencing skills.

The KA-BAR and the Fairbairn-Sykes: two fighting children of different philosophies