Sword staff: The sword of the poor!

Once upon a time in the Byzantine Empire, the wooden swords were commonly used as weapons. From the time of the legendary Byzantine hero Basilios Digenis Acritas up until present day, this tradition was kept alive. I here present the weapon of the poor people of Crete; a medieval tradition that is quickly fading away at the dawn of the 21st century.

The sword staff or sword stick is a staff with the shape of a curved sword; i.e a wooden sword. This wooden sword is not a training sword such as bokken, instead it is a strong wooden construction made from a thick and hard type of wood.

This brilliant symbol of a world fading away, the sword staff, hides all the power of Crete and all the ignorance of our age. In a few short decades the most popular weapon of the rebels of Crete has been forgotten even as memory. And the sadest part of all of this is that this weapon has its roots all the way back in the medieval empire of Greeks. The Eastern Roman Empire!

The sword staff is exactly what its name says. It is a staff, in the shape of sword. It is a wooden sword. But it is not a replica of sword or a training weapon or even a game for the kids but instead a strong construction made from thick and hard wood as you see above.

Sword staff made by Hercules Parisinakis

The wielder was also its creator and he made it as he wished.  This type of weapon has an extremely sharp edge and it can mortally injure the duelist’s opponent. Naturally, this edge can injure the flesh and it can also break bones. The primary target of this weapon was the head and secondary target the arms and the fingers. The grip of this type of sword sometimes has notches for the fingers of the wielder while others are flat.

This forgotten weapon was popular in all of Crete and it was in use in the mountain areas of the island. Many people had this weapon with them when they visited the local village’s cafeteria as late as in 1960!

This weapon and also the weapon called ‘hurhuda’ (a long staff with a knob at one point, it is like long club) were the fundamental weapons of the people of Crete during the Ottoman Empire occupation and especially before the first rebellions against them. This may sound odd since in the museums we see only the beautiful swords of the Greeks war captains of the rebellion and through this we  have thought that also the rebels of Crete used the same type of weapons. In other words we imagined that all the rebels used expensive swords and full equipment against the army of the Ottoman Empire. But the truth was very different. The rebels were ready to fight and die with their poor equipment but they only had one thing in mind; to defeat the Ottomans, and thereby gain the price of freedom. They likely also thought to start the rebellion with poor equipment and then later be better equipped from the looting of their enemies on the battlefields.

The people of Crete without weapons

During the Ottoman occupation and especially before the rebellion of 1821, the people of Crete were poor and in great financial struggle. As a result they could not buy war equipment. The firearms and also the swords were simply too expensive. Even the rich people didn’t have enough money to equip the men of their family clan.

Michael Zachariou Charonitis and his wife Theonimphy, with his sword staff in hand.

Furthermore, even if a Greek family was rich enough to equip its clan members with weapons; it was still a very difficult situation, since the Ottomans controlled all the weapon stores and also the material which was used to construct weapons. Also the Ottomans did not allow the Christians (Rum millet) to use weapons.

If someone wanted to get swords or fire arms, he would have to find a way outside of the island and of course then acting against the Ottoman law. The Ottomans controlled the sea routes so it was near impossible to obtain military weapons in those years. Only some people from the region of Sfakia could bring weapons onto the island with their boats, acting as smugglers, and of course with the fear of the Ottomans catching them.

The Christians weren’t even allowed to carry knives. Only the Muslims were allowed to carry such, and they were created in the large cities of Crete by Muslims weapon makers. As a result of the above , it is extremely rare to see military weapons of Christian origin from before 1870. Even when the law about concerning weapon ownership had changed, the actual situation did not change. A north European traveler who visited Crete in the 19th century, wrote that he saw villagers that had only one type of weapon each on them and it was the sword staff and some of them had wooden spears.

The wooden weapons of the rebels

For all the above reasons, if someone wanted to have a weapon he had to make it himself. The problem was that iron was extremely rare in Crete, so the common people of Crete couldn’t make steel weapons. But for many reasons people still needed to have weapon for self defense. So they found a way by making weapons of wood, and that was the sword staff. Everyone made the weapon by himself and often also carved beautiful glyphs or even prayers upon them. Other people made only a simple staffs named ‘hurhuda’ and they named this weapon from the sound that it made as it cuts the air; ‘hur-hur’.

The construction of these weapons is an ancient tradition of Crete coming from people who made things from wood, and beyond weapons in Crete there also were many wooden ‘engines’ who used wooden gears!

During the revolution against the Ottomans we may note the following event. After the killing of three Janissaries, the people of the Anogia village started a rebellion against the Ottomans. They started their training in sword fighting and all the male villages made wooden swords and Hurhuda wooden staffs . With theses wooden weapons they fought against Ottomans and then looted their enemie’s weapons to continue the rebellion.

The oldest source we have about the sword staff is from the books of Digenis Acritas at 1100. Βasilios Digenis Acritas, Dimitrakos publications Athens 1941

The oldest information we have about the sword staff is from the books of Digenis Acritas from around 1100AD. In these books the hero uses the sword staff many times, so we understand that this type of weapon was in use from medieval time (and probably older) and it  was also used as a weapon by professional warriors such as the Acrites. Furthermore, we also have illustrations from the book of Skylitzis that appears to depict swords which are like sword staff but we are not sure if the blade was made from wood or metal.

The last makers of this weapon

For the last 10 years we have been trying to collect information about the sword staffs of Crete. In this research we have found the last living makers of these weapons. They are two. Unfortunately both of them passed away some years ago.

Hercules Perisinakis was 97 years old when we made a visit to his home in the village of Maratho of Malevisiou back in 2005. He had made sword staffs and he sold them to the local stores of the village and in Heraclion city.

The other sword staff maker was John Polichronakis from Mizorouma and unfortunately he passed away before transfering his art to the new generation.

In our days this common weapon of Crete is going to disappear. We can find this type of weapon in some private collections and at the Folk and Historical museum of Rethimnou and the museum of History of Heraclion.

The sword staffs of the Renaissance

Outside of Greece we can also see wooden swords in medieval Europe and also during the Renaissance. Those types of sword were used as training weapons (see Dussack) but also as real weapon for those who couldn’t buy a metal sword.

In medieval Italy groups of young man fought each other with wooden swords and shields. In those conflicts they sustained serious injuries and also sometimes deaths occured.

In Venice of 14th century and up until the 18th century, thousands of citizens took part of events called the ‘Bridge Battles’. It was an extremely violent ‘sport’ and the goal of this ‘battle’ was for one team to win over the other team by occupying the bridge. All of them they used wooden swords.

–Basilios Digenis Acritas was a legendary Medieval Greek hero.  The nickname ‘Digenis’ means ‘he who has two origins’. His mother was a Greek princess of the Byzantine Empire and his father was an Arab prince. With their marriage (after the Arab prince became Christian and citizen of the empire) they had their offspring named Basilios.

From early age he did many great deeds. He killed a lion with his bare hands when he was a child and many others amazing feats. His greatest achievement was a duel with ‘Death’ at the Marble Halls (the gates of Hades). In this duel he faced Death with sword in hand, and he won, but later Basilios passed away from disease.

His last name Acritas, was not actually his last name but a name of type of warriors that is given to the men who protect the borders of the empire from the enemies. The meaning of the word Acritas means border man or ranger. Of course Basilios Digenis Acritas was not a real person, but through these myths we learn about the spirit and the bravery of all Acrites of the empire. They protected the villagers from the bandits, they protected the borders from foreign invasion, but they were always few. So they fought with bravery and cunning and with hit and through tactics.

This article has been edited to a somewhat higher degree, to correct the choice of English terms and phrases, and also the chosen tempus for ease of understading. Any misunderstandings or errors resulting from these edits should be blamed on the editor and not the first translator or the original author. 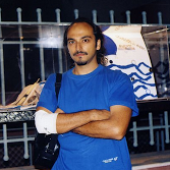 George E. Georgas is the founder of the Hellenic Academy of Historical European Martial Arts ‘Leontes’. He is certificated fencing instructor of the Hellenic Fencing Federation and also national referee of the Hellenic Fencing Federation at the epee. He is instructor of Meyer Freifechter Guild with the rank of Fecther and he is the group leader in Greece. He is also member of Learn Sword Fight (Gladiatores). He is in the Administration Council of the ‘Pammachon’ (which is the name of the Hellenic HEMA Federanion in Greece). He is also instructor of weapon fighting of the Association of Historical studies ‘KORYVANTES’. He is studying the ancient Greek and Byzantine warfare, such as the use of rompaia, spathion and paramirion types of swords and other weapons such as the spear. He is also give stage fighting lessons to the theatrical team ‘The Blue Rose.’