On fencing societies and charity in the 19th century

At least as early as in the early 17th cent, fencing masters swore to care in particular for widows and orphans, as can be seen in e.g. the oaths of the fencers of the Company of Maisters of the Noble Science of Defense. And this tradition was maintained in Germany until modern time, partly as a way to handle the effects of war. The following is a description of the contemporary German fencing culture, published in the Swedish newspaper Dagens Nyheter (Today’s News), in January 14, 1884. The German Reichsfechtschule was founded on October 13, 1880 and liquidated in 1939. It was responsible for creating orphanages in several cities of Germany.

“Deutsche Reichsfechtschule
…has this fall also here had a branch which already counts 11 “fencing masters” (Fechtmeister) and at least 250 “fencing students” (Fechtschuler), of which many are enlisted for all of their remaining life. Are then Germany’s numerous military fostering and teaching institutions then not enough, and have one out of fear for the threatening bellicose neighbours already seen oneself forced to even by those abroad living Germans create “fencing schools”?

This question appears to be justified, as one from reliable sources learn that about 25,000 such fencing schools are spread out over the old and the new world, and that more than one Stockholm-resident has come across the recruiting attempts of a fencing master. In Germany itself it is hard to escape one’s destiny, for there it is not only fully grown persons, but also older youths that roam about and recruit students. It almost appears as if all these fencers would like to form a society of their own within the state, for every zealous member, be they master or pupil, smokes only fencer tobacco, at the turn of the year he sends fencer greeting cards, if he is to entertain himself with dancing, he does so only under the condition that “fencer waltz” or “fencer polska” is played. If he sits at night with his comrades at the “fencing host” and is in a warlike mood, he sings his “fencer songs”. If the fencer is travelling and comes to a new city where he has no acquaintances, he takes his refuge in the “fencer calendar”. Here he finds information regarding all “fencer hotels” and at what times, which the fencers gather in their halls. He takes out his member card, the host makes a bow before him, and he is greeted welcome to the merry circle.

At nearly every table he recognizes a newspaper with the title “Deutsche Reichtsfechtschule”. Out of curiosity he begins to browse through the ads. There everything that here has been counted is offered. Among the announcements of the newspaper reads an obituary for a deceased fencing master and further down an engagement between a fencing master and a fencing misteress is announced. The brave fencer has then gone so far that even his better half must be familiar with the fencing art? Yes, it happens not so seldom, that the women distinguish themselves through a particular ability to attract non-members into their web, naturally mostly men. However, we continue to browse the newspaper. Many pages are filled with announcements from various “fencer unions”; new fencing schools have been started, a zealous fencing master has been named “high fencing master”, a such to “general fencing master” and yet another to “fencing councellor”, and then follows a long report on income and expenditures from the fencers highest authority (Reichsoberfechtschule) in Magdeburg.

Furthermore, on every page reads the word “Waisenhaus” (home for orphans). Herefrom the thoughts are involuntarily led to the bloody war which tore away so many a galant fencer and robbed numerous children of their fathers’ secure support. Yes, all the incoming funds that are counted in the movement, the fencing masters have collected for the benefit of fatherless children, for “Deutsche Reichsfechtschule” is nothing but a charity society. The words “fechten, “Fechter” mean not merely fence, fencer, but also beg, beggar; a fencing master is thus also a master in the art of begging for a good cause. The society has to its purpose to care for fatherless children, and in particular for building orphanages.

It was instituted three years ago by general agent H. Nadermann in Magdeburg. The incoming funds at the precent exceed the neat sum of 220,000 crowns. The first orphanage is placed in Lahr (in Baden). One has for this purpose purchased and thereafter rebuilt an old castle which is situated in a lovely and healthy mountain region. The required means have been accomplished through collecting and selling all kinds of garbage: stamped post stamps, cigar stumps, used corks, orange peel, apple and pear seeds, guttaperka pieces, old glacé gloves, etc. Furthermore cash contributions are collected through the selling of member cards. One such costs 25 öre (10 pfenninge) for a year, normally though a larger contribution is paid. For 6 mark one becomes a lifetime member.

Which is the equivalent of our saying “Many small streams make up a big creek” This custom have in this case come true. The example encourages following, mayhap even with us.

This Saturday evening, the here in Stockholm 11 resident societies (Fechtschulen) held a meeting at Hotell Hamburger Börs to join a union, wherethrough the association with the high council in Magdeburg would be greatly eased, and decided therewith a such joining for a kind of central union. To the board for this the following persons were chosen: wholesaler F. Voss (Union fencing master), cartographer P. Berndt (ditto), wholesaler J. Weisner (treasurer), and principle A. Streich (secretary).”
-Today’s News, January 14, 1884. 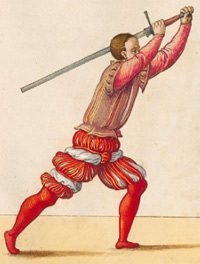 Is there really a Left Vom Tag?

From Treatise to Exercise- a model for turning text into action