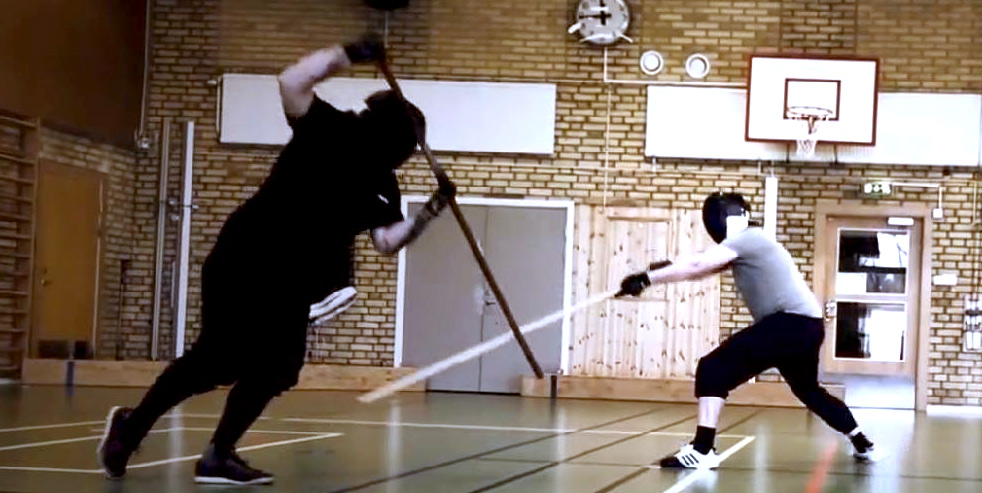 In our Meyer staff class we have been forced to develop methods that meet the simple fact that in staff fencing you are actually training with the actual sharp weapon and no protective gear will keep you safe from potentially crippling harm. Consequently we have needed to find ways of coming as close as possible to full contact sparring, using all available techniques, without too high a risk of actually injuring each other permanently.

For this I have defined two methods that are close, but distinctly different in nature; sparring and free fencing. Both are quite easily applicable to whatever weapon you prefer and this article should not be read as merely discussing the staff.

What Sparring means is clear to most readers, and just like in any sparring certain staff techniques are forbidden for use against the opponent’s body. For staff sparring this means striking hard only to the opponent’s staff etc. Similar regulations are naturally used for any weapon or style in martial arts; for the European longsword usually involving restrictions on reversing the weapon to strike with the cross or pommel, on attacking joints, neck or groin, etc.

An example of sparring with the staff can be seen here.

Free fencing however, is different in nature particularly in mindset, and due to the specific setup all techniques can and should be used, even the most dangerous ones.

The purpose of Free Fencing is to learn through experience, not necessarily to win. Consequently you are primarily not to hit the opponent, but to provoke him/her to respond to a threat. This threat can be a real one or a feinted one. And to the defender it should all appear the same; as a real threat that must be handled.

And to better understand this we also need to define provocation. In combat the word is to be understood as attacking your opponent with a proper attack, but expecting the opponent to be able to parry it. It is not a feeble and weak attack. It is a quite real attack that will hit unless parried. But, there is also a second follow-up attack planned that relies on the assumed parry.
In Free Fencing these provocations are somewhat more controlled, and although you should be able to hit with it unless parried, you also need to be able to moderate the force or even halt it completely if needed, in case the defender doesn’t respond correctly, or in time.
Exactly how much force can be used on impact is impossible to define here as it is both dependant on weapon, style, protective gear and also personal preference.

Quite importantly, Free Fencing shouldn’t be confused with Slow Fencing, as speed is not necessarily a factor here. As always you should fight at a speed that puts you in good control over your body and weapon. If you can control yourself well enough at full speed, then that is how fast you should go, at least part of the time. However, the “weakest” party should set the tempo for both fighters so no one is forced to do the exercise at a pace he/she is uncomfortable with.

An example of Staff Free Fencing can be seen here.

Your mindset should still be to fight with concern for your own safety, and with a certain aggressiveness. However, as this primarily is a learning exercise, you are expected to experiment and take more personal risks than you would in an actual fight. Do things that are uncomfortable, that you don’t feel quite secure with. Doing so will make you more dynamic and your “toolbox” will thereby be expanded upon as you discover how and when you can use the various techniques. Trust in your partner to keep you safe and assume the same responsibility in return.

Leave your ego out of things, but at the same time try not to intellectualize things too much, which often happens if you fence too slow. There is a sweet spot where you fight fast enough to not start thinking too much but slow enough to be able to break your attack if you need to.

While striving to come close to actual combat it is also possible to use Free Fencing with various focuses to promote certain aspects that you wish to emphasize. Here is a group of such exercises, with the first few sets designed around working with the concepts of long and short distances. We do these for 1.5-2 minute bouts to maintain focus throughout. If resting is needed between bouts to maintain or regain focus then do so.

Also a longer break for reflection on what works and what doesn’t, how things may be modified or even deciding on working with completely different techniques and what that requires should be included into the training session.

Choose 2 techniques for large and 1 for close distance respectively and try to use them in free fencing. You are still allowed to use all techniques, but when the right circumstances are there, or if you manage to create them, then you use your planned techniques.

For that reason; Before fighting you need to consider under what circumstances the techniques can be applied, ie what leads up to it and how can it be done safely?

Finally, consider how you can retreat from a successful as well as a failed attack using these particular techniques.

Also note carefully that you may well never get an opportunity to use any of your chosen techniques. Do not try to force yourself into using them in a context which they are not designed for. Wait for the right context to occur, create it or work with other techniques. Especially for the close distance techniques it may well happen that a good opportunity never occurs.

One of the fighters uses only techniques for large distance while the other tries to close distance and use the associated techniques. Or grappling.

This exercise too has the same general considerations as above before you actually start fencing. And the same for during and when retreating.

One of the fighters uses only techniques for large distance while the other tries to close distance and use the associated techniques. Or grappling

This is the same as above, but without cooperation. Both fighters are trying to provoke/attack the other. Consequently this involves greater risk for injury.

Start from a bind at long distance and try to maintain contact with the opponent’s weapon as much as possible, when thrusting and displacing from long distance or when moving in for close techniques. Leaving the bind briefly and grappling are both allowed.

Here, the idea is to work with good and bad fighter types, characters, as a tactical tool. These can be divided into many different types, but for the bad, it can be boiled down to two;

A. Those who overextend
– Who should be countered by voiding and counter attacking.

B. Those who like to void and counterstrike
– Who should be countered by provocation/feinting and attacking.

Furthermore you can divide fighter characters into 4 different types:

A. THE BRAWLERS – who fight overly aggressively
– Who can be defeated by stepping back and parrying while letting them lose stamina and strength and then attack.

B. THE OPPORTUNISTS – who prefer to counterstrike as the opponent is in an awkward stance
– Who can be defeated by provocation/feinting and then attacking.

C. THE SURVIVORS – who only attack when they have an opening they can retreat safely from.
Who are the best and are the hardest to defeat.

D. THE PACIFISTS – who are overly passive
Who can be defeated by either attacking first or through provocation/feinting and then attacking.

In provoking you need to assume all 4 of these at times.

For the exercise, one of the fighters selects a character from a, b or d that he/she maintains throughout the exercise. The opponent tries to identify the character chosen and acts accordingly.

In the end, we should all strive to become type C, while sometimes fooling the opponents into thinking we are not.

This is full Free Fencing where you are allowed to use any techniques and to work at any distance. It is however important to still work along the principles described in the beginning of this article.

Again, an example of this is the 2nd video above.

All these exercises are meant to train you in learning to understand and identify the contexts in which the various techniques can be used so you can use them without thinking, instead responding intuitively. At the same time they will also help you learn to create these contexts through provokation and hopefully to avoid being foolishly provoked yourself, thus making you a Survivor type fencer, instead of a Brawler, Opportunist or a Pacifist.

To finish things off, the practical application of Free Fencing is not hugely different to sparring, but the difference in mindset opens up for the use of quite dangerous techniques. It also opens up for more artful fencing where we can explore things more freely, in a manner that I suggest will help us to implement them in regular sparring as well as in fencing with minimal protection.

In this there are two planes of thought that you are working with simultanously; one microsecond-tactical, intuitive plane where you respond with quick thought, and one long-term tactical plane where you have certain tricks at the back of your head that you wait for or create an opportunity to use. It is a bit like playing guitar and singing at the same time, with two streams of consiousness and awareness.

Again, it also deserves emphasizing that in these exercises you shouldn’t use your chosen techniques unless there is a suitable context for them. Consequently, in a sparring match you may well never get an opportunity to use them, despite however much you try to provoke your opponent into giving you one.

Finally, in the Let the Right One In exercise you will be hit multiple times in the same area as you offer it as a target to the opponent. And if you are using a powerful weapon like a polearm, then you may well experience discomfort and in worst case even accumulated trauma afterwards. Be careful with repeteated attacks to the same body part, and especially the head and neck.