The swordsmiths around the world have seen some pretty fierce competition developing over the last few years, especially the high-end companies like Albion, who suddenly find themselves being outrun by swordsmiths who directly target the needs of us HEMA-fencers, which Albion really doesn’t, instead more catering to sword collectors.

One such swordsmith that I have been fortunate enough to follow is the Hungarian swordsmith Péter Regenyei. This review will discuss his training swords of the so called “feder” type.

Péter Regenyei practices and teaches HEMA himself and thus knows from personal experience what we need from our swords. Although he can make very, very nice swords at the high-end range of the spectra, his work has received the most attention for his simpler training swords, primarily the fechtschwerte.

His swordsmithing skills extend far beyond this though, as is apparent from these images.

Regenyei’s “Dürer” longsword, based off of artwork created by Albrecht Dürer. This is my dream sword…

Twohanded ‘Schlachtschwert’, commonly used by Landsknechten in the late 1400s/1500s. This is what my fechtschwert wants to be when it grows up.

In general Péter’s swords are more or less based on historical design, but in the case of the training swords they have distinctly more tapering blades than what we see on preserved historical training swords and also curled points, which is a good feature but not seen on the antique fechtschwerter.

Interestingly, Péter’s fechtschwerter are offered in various combinations of hilt (pommel, cross and grip wrapping) and schilt/blade designs, which makes it easy to choose a more personal setup, despite the swords being pretty much off-the-rack products. Also, Péter is quite happy to adapt the designs specifically to your preferences, at some extra cost, of course.

The pommel designs. Personally, I love the somewhat rough round pommels.

Over a period of several years, and based on his own personal and others’ fencing experience, Péter has also continuously improved on the designs, adapting them to people’s requests and the learned requirements put on them for training and tournament fighting.

The sword I will be reviewing specifically has the same blade and hilt as his tournament sword, although without the side rings seen in the picture below.

The cross is simple and functional, as is the pear-shaped and peened pommel. The cross has rounded points, as seen in the image, which is good in case you get a cross thrust into your armpit or chest, an experience I have had myself too many times.

The grip itself is wrapped with a flat, braided cord which looks quite nice and offers good gripping even when held with sweaty hands. The grip is also suitably thin, much in line with my personal preference. It is also quite long with its 32cm; enough to fit three hands (or two bulky gloves) onto it without touching the pommel, and as such it fits well with for instance the style of Joachim Meyer, but not as much with what is taught in the so called “Döbringer” treatise, the Hs.3227a, which appears to advocate a grip shorter by a hand, roughly, striking with the hands close to each other.

The hilt of the tournament “feder”. The rings are not included on the sword reviewed here.

The flared schilt on the sword I have is flat angle, again quite similar to some of the swords shown in Joachim Meyer‘s treatises. There is also an option for curving wings, more similar to those on the Albion Meyer, only much safer as the wings are not sharp but instead well rounded.

Fechtschwerter from Joachim Meyer’s treatise of 1570.

The whole sword oozes functionality. It is not a fancy sword by any means. Instead this is very much a training tool, just like the fechtschwerte of old, which often were quite crude tools for learning. The purpose of the sword is crystal clear: Learn from using it. The main difference to the historical training swords is, as described earlier, the fairly narrow and curled point, where the preserved antique swords instead often had a broad, spatulated point, although the fencing treatises appear to indicate that other designs were in use also. Regardless, this makes these training swords safer for thrusting, even with little protection. (Proper protection is of course still required).

The length of the sword also reflects the design inspiration borrowed from Joachim Meyer’s fencing treatises. The sword reaches well into the arm pit of a regular sized man, which seemingly corresponds well also to the teachings of fencing masters like Filippo Vadi and Hans Talhoffer.

Despite its length, 132cm, and due to excellent leverage from the long grip, the blade is very easy to control. The sword is somewhat light, weighing in at only 1.4 kg (which, for reference, is quite close to an Albion Meyer, although 9cm longer). This is at the lighter end of the spectra, but still well in range with historical longswords. Furthermore, this light weight combined with the long hilt also aids in the control of the blade and the point and it makes the sword feel quite lively.

All of the above, plus the profile of the blade also makes the strikes slightly less powerful, which can be both good and bad: Good, as it is a bit safer in sparring. Bad if used against a sword of a more powerful design, like e.g the Pavel Moc Fechtschwert. Of course, custom design is always an option if you wish for an even heavier blade than the two offered for the standard sword.

Hardening is the process that makes the blade stronger and more resilient to cuts, but it also makes it more brittle and prone to breaking, for which reason the blade is also tempered so it regains some flexibility. This is a rather complex topic and I will not go deeper into it than this. Typically, training swords have rather thick edges, which makes them even more durable anyways. Proper flexibility is quite important, since blades break more often when done badly.

Having tested these swords against various types of swords, they appear to hold up well, even against notoriously hard Albion and Arms & Armor swords. However, as always, swords should preferably be used against other swords of similar characteristics. Consequently, if most of your training partners use sturdier and heavier blades, then you would do wise in considering asking Peter for a blade that matches this. Currently, two blade types are offered; a more flexible blade weighing 1300-1400gr or a stiffer blade weighing in at 1400-1500gr.

The flex of the two blade types.

There have been some early reports about blade breakages where the last five inches or so fly off, similarly to the Hanwei Federschwert reports. However, this appears to be an issue that has been resolved with thickening of the blades and it seems to now be on par with the frequency of blade breakages from swords of other swordsmiths.

The flex is typical of this group of swords. The last third flexes well. The flex isn’t much noticeable or distracting in the cuts though and they don’t affect the cuts before entering the bind. Even in the actual clashing of blades it is not pronounced in any way, unlike what we see with the Hanwei Federschwert which behave with distinct whipping distortions.

Basically, this is a training sword designed for all HEMA “German style” longsword fencers. The sword design suits unarmoured fencing as trained from early 1400s all the way up until very early 1800s. It is a bit rough in design, but that is as should be and actually attractive in this case. It suits equally well for everyday practice and for tournament fighting. And the price is hard to beat with rather few competitors being able to offer swords of the same quality and cost. This of course also makes it very attractive and an excellent choice for fencers looking for their first steel longsword.

Furthermore, the quite unique possibilities of real easy customization with already prepared parts for pommel, cross, grip wrapping and blade designs make this very attractive for all of us who wish for a more personal sword without having to spend a small fortune for it. It is also quite practical, as it is easier to keep track of your sword in the training halls.

Finally, worth mentioning is also the fact that Péter seeks to cater to not only the longsword fencers, but also the sabre and rapier fencers, or basically just all HEMA fencers in need of swords for training. Together with e.g. the sabre fencers of the Gothenburg Historical Fencing School he has developed sparring sabres, but he also offers “feder”-versions of sideswords, montante, Bolognese and arming swords.

Having a swordsmith like Péter, with experience and understanding of both HEMA and the needs and requirements involved with the training and tournament fighting, and dedicating himself to creating training swords that satisfy these truly is a blessing for all of us. Few swordsmiths are so directly dedicated to us as a community and for that Péter has my sincere respect and gratitude. 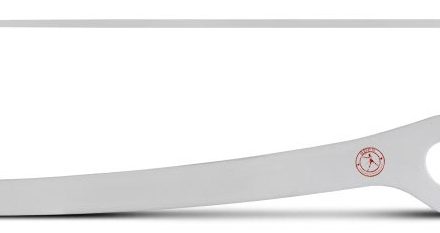